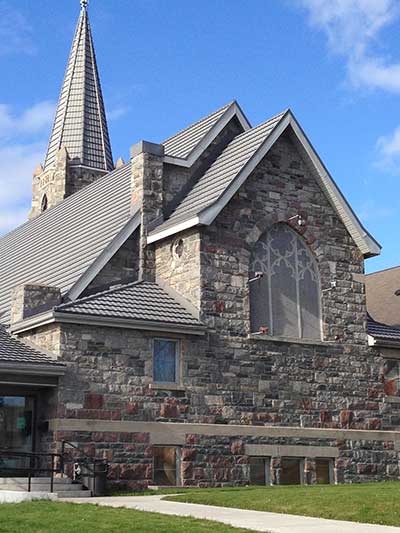 Welcome to St Alban’s Cathedral!  In 2017 we celebrated 100 years of ministry on Main Street.

The current building was designed by Arthur J. Wills, an architect from Winnipeg.

The style is the Gothic Revival – a style that is said “to humble man and glorify God.”  Because of that the Gothic Revival style was most often employed for church architecture.  Its defining features include: steeply pitched gable roofs, foliated ornamentation, pointed arches, and towers.

The outer walls are constructed with varied-coloured local granite with a natural rock faced finish which neatly represents the rustic textures and colour appropriate to a country church.

The main entrance at the northwest corner is marked by the tower and graceful spire.

The bell in the tower was made by John Taylor and Co., Bellfounder, Loughborough, England.  Lettering on the bell reads: ‘Coronation 1937 – in Memory of the Departed and for your inspiration we ring in dulcet tones.’

The chancel is distinguished from the nave by a chancel arc.  Another arc marks the sanctuary and the East end contains a fairly modelled tracery window over which a decorated ribbon and inscription is painted on the wall.